* 265 works from 17 countries make up the entries, 21% more than the previous edition.
* Spain, Argentina, and Brazil lead the list of countries with most submissions.
* The city of La Laguna will be the new host to the event.

The Ibero-American Animation Quirino Awards fourth edition have received 265 works from 17 countries, 21% more than in the previous year. The submitted works will compete to be finalists in the following categories: feature film, series, short film, school short film, commissioned film, animation for video game, sound design and original music, visual development, and animation design. The Tenerife Film Commission is the main sponsor of these awards, that will be held on May 29th at La Laguna, on the island of Tenerife.Spain leads the list of countries with 28% of the works, followed by Argentina (16%), Brazil (12%), Mexico (11%), Colombia (9.5%), and Portugal (6.5%). Works from Bolivia, Chile, Costa Rica, Cuba, Ecuador, Panama, Paraguay, Peru, Dominican Republic, Uruguay, and Venezuela have also been submitted.

The entries include 8 feature films, 35 series, 124 short films, 34 school short films, 53 commissioned films, and 11 video games. Short films have grown by 59% compared to 2020, highlighting thus the importance of this format in the international circulation of works and the promotion of new talents. Altogether, the works represent 45 hours of animation and reflect both the technical and thematic diversity that characterize Ibero-American animation.

A selection committee made up of Agnieszka Kowalewska-Skowron, Loïc Portier, Sydney Padua, Paco Rodríguez, and Ylka Tapia will choose six nominees per category to be announced on February 2021. Eventually, an international jury will choose three finalists in each category among those selected.

New venue
The Quirino Awards organization also announced that the city of San Cristóbal de La Laguna, on the island of Tenerife, will play host to the fourth edition of the Awards. Declared a World Heritage Site by Unesco in 1999, La Laguna is one of the island’s references in cultural matters, with several institutions, theaters, museums and a university. It will be precisely the Leal Theater of the town where the Awards ceremony will be held.

In addition to the Awards ceremony, the Quirino Awards will once again bring together animation professionals at the Ibero-American Co-production and Business Forum, to be held on May 27th, 28th and 29th in La Laguna. In 2020, this industry activity brought together representatives of a hundred companies from 19 countries – including production companies, sales agencies, tv channels and distributors – who held more than 800 B2B meetings. Participation in the Forum is open to professionals in the sector from Ibero-America, Portugal, Andorra and Spain, and registrations will be open next February on the Awards’ website.

About Quirino Awards
The Awards are named after the creator of the first animated feature film in history, the Italian-Argentine Quirino Cristiani, who in 1917 directed “The Apostle”; an Argentine production in which 58,000 drawings made by hand and shot in 35 mm were used, in addition to several models representing public buildings and the streets of the city of Buenos Aires.

Launched in 2018 by a group of Ibero-American professionals, the Quirino Awards have become a reference for the promotion of Ibero-American animation and the meeting between professionals from the region. Together with the Pixelatl Festival (Mexico) and Animation! Ventana Sur (Argentina), the organization of the Awards is part of La Liga de Animación Iberoamericana (the Ibero-American Animation League), an alliance conceived to internationally promote projects of the region. Likewise, it has promoted different studies and researches with the aim of analyzing the sector and analyzing its future, among which the Quirino Ibero-American Animation White Paper stands out – a publication that offers a mapping of the sector in the 23 countries that are part of the Ibero-American region – and Resilience in animation, a report that analyzes the impact and adaptability of the sector to the situation generated by the global pandemic. In 2020, it co-organized, together with the Inter-American Development Bank (IADB) Cortos de Encierro, the First Animation Festival on Disability in Latin America and the Caribbean.

The Quirino Awards, which have the main sponsorship of the Cabildo de Tenerife through the Tenerife Film Commission, reflect the determined commitment that for years has been made to animation in the island. This commitment also materializes in concrete actions to support the flourishing local industry, assistance to the main international markets and the promotion of the Tenerife Isla Cartoon brand, specific to this sector. 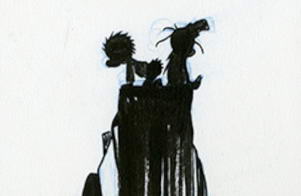 Is goin’ down harder than goin’ up? – Not if you jump.