50 Outstanding Projects Selected from over 80 Submissions

Stuttgart – with a total of 84, more animation projects than ever before have been submitted for the 13th edition of Animation Production Days (APD) in Stuttgart. Yesterday the jury selected 50 of these projects from 17 different countries to be presented at APD. On 2 and 3 May 2019 the producers of these projects will discuss coproduction and financing opportunities with potential partners in a series of pre-planned one-to-one meetings in Stuttgart’s L-Bank. APD is the most important business platform for animation projects in Germany and takes place as part of the Stuttgart International Festival of Animated Film and the FMX – Conference on Animation, Effects, Games and Immersive Media. Around a third of the projects presented here in previous years have now gone on to be successfully produced.

The large number and consistent high quality of the submitted projects are indicative of a continually expanding industry in which a spirit of optimism prevails. In comparison to live-action film, and despite fierce competition, European animation has a successful track record on the international market. The submissions also reflect the great diversity of genres, formats, styles and techniques that distinguish animation. Alongside classical series and films, also cross-media projects, Games, VR projects and online formats are represented, including numerous projects for teenage and adult target audiences. Topics range from edutainment, comedy, adventure stories and fantasy for kids to historical and political material, animated documentaries, satire and science fiction.

9 of the projects are from newcomers who have gained a place via an application to the APD Talent Programme. This year, as part of its funding from the Creative Europe MEDIA programme, APD can award a total of 15 free accreditations to outstanding young talents. At APD they are given the opportunity to discuss their ideas with seasoned industry experts, develop contacts with important decision-makers and find cooperation partners for their projects. One example of this is the short film “Crabs” from Poland which has qualified for participation in the APD Talent Programme as part of a cooperation with the Animation Sans Frontières European training programme.

An overview of the selected projects can be found on the APD website at the following link: 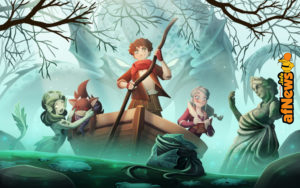 Investors Can Still Register until 8 March 2019

Applications for the Trickstar Business Award Accepted until 15 March 2019

All projects selected for APD are invited to apply for the Trickstar Business Award. The 7,500 Euro prize is being presented in 2019 for the third time by the Stuttgart International Festival of Animated Film (ITFS). Companies with an innovative business model can also apply for the award even if they are not participating in APD. The deadline is 15 March 2019. The submission form and detailed rules and regulations can be found on the ITFS website at https://www.itfs.de/en/branche/call-for-entries/

Animation Production Days (APD) is a business platform for the international animation industry and takes place annually as part of the Stuttgart International Festival of Animated Filmand FMX – Conference on Animation, Effects, Games and Immersive Media. APD is organised by the Film- und Medienfestival gGmbH and the Filmakademie Baden-Württemberg. It brings together co-production, financing and distribution partners for animation projects in a series of one-to-one meetings and, with the APD Conference, offers focused discussions and presentations on current challenges facing the industry.