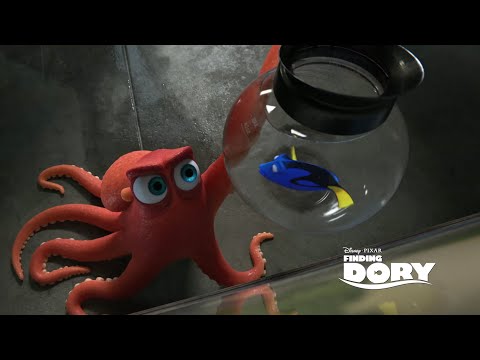 BURBANK, Calif. (April 1, 2016) – Disney•Pixar’s “Finding Dory” filmmakers revealed today that Hank, the film’s cantankerous octopus with camouflaging capabilities, has appeared in every one of their feature films since 1995’s “Toy Story.” “Finding Dory,” featuring the voice of Ed O’Neill as Hank, opens in theaters nationwide on June 17, 2016.

“Every Pixar fan knows that we love Easter Eggs,” said director Andrew Stanton, who also directed the 2003 Oscar®-winning film “Finding Nemo.” “And until now, Hank has been our most closely guarded secret. There are even people internally at Pixar who don’t know about this.”

Pixar is known for the hidden gems that appear in its feature films, including the Luxo Ball, the Pizza Planet Truck and A113, which is a nod to the animation classroom at CalArts, where several filmmakers attended. But the octopus—who’s actually a “septopus,” as he’s missing a tentacle—has remained a secret for two decades. “Hank started off as a bit of an inside joke between those of us who were here at Pixar in the very beginning,“ said Stanton. “But since then, finding a place for him in our films has become part of our culture, and I’m glad we finally get to introduce him properly to fans.”

The studio released a short video featuring Stanton and O’Neill, showcasing several of Hank’s cameos throughout the years and even providing a new glimpse of the character in action in “Finding Dory.”

ABOUT “FINDING DORY”
Disney•Pixar’s “Finding Dory” welcomes back to the big screen everyone’s favorite forgetful blue tang Dory (voice of Ellen DeGeneres), who’s living happily in the reef with Marlin (voice of Albert Brooks) and Nemo (voice of Hayden Rolence). When Dory suddenly remembers that she has a family out there who may be looking for her, the trio takes off on a life-changing adventure across the ocean to California’s prestigious Marine Life Institute, a rehabilitation center and aquarium. In an effort to find her mom (voice of Diane Keaton) and dad (voice of Eugene Levy), Dory enlists the help of three of the MLI’s most intriguing residents: Hank (voice of Ed O’Neill), a cantankerous octopus who frequently gives employees the slip; Bailey (voice of Ty Burrell), a beluga whale who is convinced his biological sonar skills are on the fritz; and Destiny (voice of Kaitlin Olson), a nearsighted whale shark. Deftly navigating the complex inner workings of the MLI, Dory and her friends discover the magic within their flaws, friendships and family.